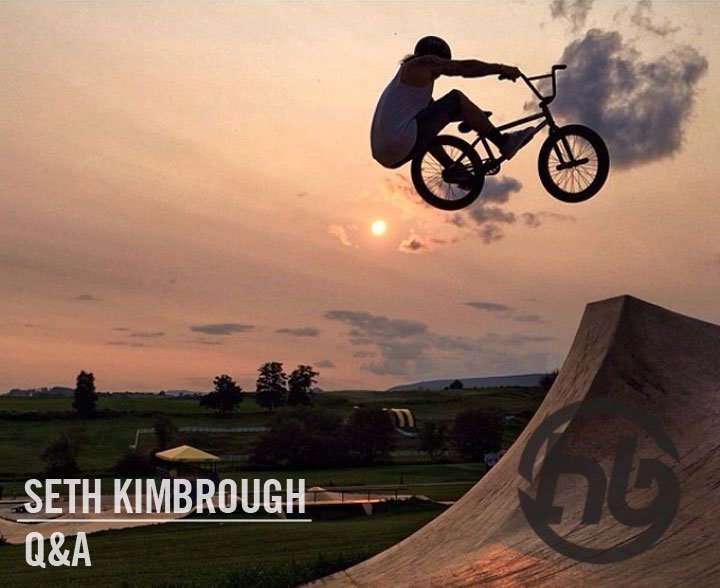 Last week we posted a question on the Hoffman Bikes Facebook Page, “If you could ask Seth Kimbrough one question what would it be?”. Had a great response to this question, so we sent these questions over to the man himself to answer some of the questions our fans posted.

Scott Redmond: How many sugars do you have in a cup of tea?
Seth Kimbrough: None! I try to stay away from sugar these days as much as possible. I like my tea straight!

Felipe Marques: At what age you did your first 360?
Seth Kimbrough: Hmm.. I believe I was ten.

Dave Lovesacupa Mclellan: For years idolized you in bmxing . So much so I watched every bit of video could find just so I could try ride like you when I was a youngster . You, Mat Hoffman, Josh Striker, Van Homan and Rat Boy, Tim Fuzzzy Hall, Tj and Brian Tunney all Inspiration to up and keep riding . Who was/is an idol you look up to ? And why ? Who has had the biggest influence in your riding/life in bmx . Thanks . Always digged your bones tee just could never afford one .
Seth Kimbrough: First off thank you very much! That means a lot! I guess growing up is have to say Hoffman for sure! Also Troy McMurry, The Gonz, and Taj Mihelich.

Nick Solie: What’s it like to have talent?
Seth Kimbrough: Haha! You tell me!

Ross Toal: When are mortal treason touring the UK? (Serious questions there)
Seth Kimbrough: That’s always been a dream of mine. Unfortunately we just don’t have the money to pull that one-off, but I’ll keep dreaming!

Craig Whitewater: Same question was for Matt but didn’t get a response; Would you like to have lunch with me? I’m buying.
Seth Kimbrough: Time and place?

Don Binswanger: what is the meaning of life?
Seth Kimbrough: You know… That’s a good question! I’ve been searching for about 30 years now, I’ll prob die on the search! If you find out, let a brother know!

Jace Tadic: You have been riding for Hoffman for 15 years now, and its incredible to see such loyalty still left in bmx. From those 15 years is there a moment you favor the most? Something you reflect on often?
Seth Kimbrough: I would have to say 1999. That’s when I realized I was really part of the team, and that my dreams were coming true. I was hanging out with the guys that only a year earlier I would watch in videos and think, no way I’ll ever be where they are. Hoffman Bikes has been through so many changes since then. Ups and downs, but they are still here, and with Mat 100% behind it, I will continue to support his dream, because he’s the one that pushed me to where I am today.

Jace Tadic: Also, is there any guidance you can give to someone trying to get back into riding. I’m finding it very difficult to stay focused and am too weary of injuring myself but it is something I need and want to do. Bmx has always been my happy place.
Seth Kimbrough: Don’t push yourself to hard. Don’t worry about trying to keep up with the new tricks/trends, just find a nice steady pace for YOU, and stay there. Have fun with it!

Jace Tadic: Are you going to bring the dreads back!?
Seth Kimbrough: I think about it from time to time!

Kevin James Daley: Can we hang out?
Seth Kimbrough: Yes we can!