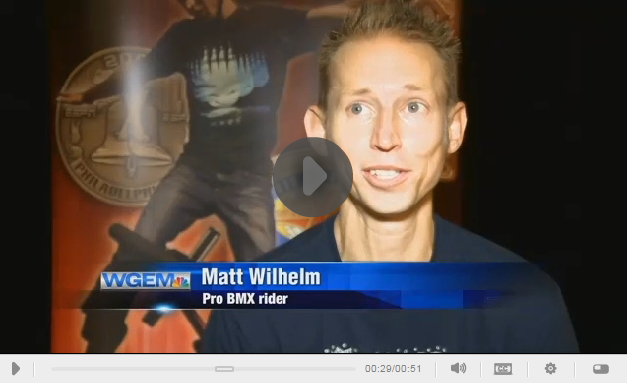 Matt Wilhelm getting some news coverage over the weekend.. Matt, performs in front of thousands of students each year sharing his story about being a pro bmx’er. Here is a short news clip from the NBC News in Quincy, IL

Check Out the Video Here

Matt Wilhelm is a Pro BMX rider and has appeared on America’s Got Talent and Cartoon Network. However on Friday, he stopped by Quincy’s Baldwin Intermediate School.

Wilhelm says he loves talking at schools because the kisd love to see tricks, such as the tornado spin, the Spider-Man and tricks he’s made up. He says what’s important to him though, is telling his story while entertaining the kids.

Wilhelm says he talks to kids about how becoming a pro took hard work and determination.

The other half of Wilhelm’s message was about overcoming bullying. He says when he was growing up, bikers and skaters were picked on.
Wilhelm has encouraged kids to say something or tell an adult if they see bullying.